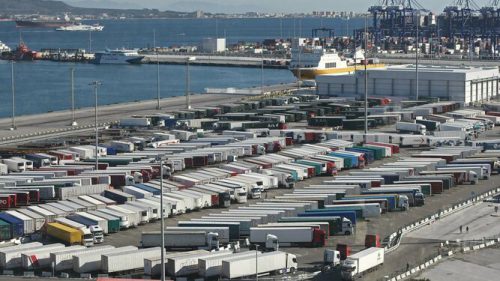 The President of CETM Frigoríficos, Francisco José López Martínez, has sent a letter to Mercedes Gómez Álvarez, Director General of Land Transport, to ask her to find a solution to the delays experienced by transporters in the port of Algeciras, caused by the customs control checks on fruit and vegetable products transported from Morocco to the European Union.

The president of the CETM association that groups the refrigerated transport companies denounces that these inspections are causing the paralysis of the trucks for more than 48 hours, a situation that is causing serious damage to the drivers, “who see their services prolonged unnecessarily, delaying their return to their homes”.

The controls carried out by the Foreign Health Service are inadmissible, as they involve perishable products that cannot withstand such long waits that, on many occasions, end up causing the loss of the goods.

This is not the first time that Francisco José López has denounced this situation, but given the lack of response from the institutions, the President of CETM Frigoríficos has not ceased in his efforts and has once again asked for collaboration in the face of a problem that is damaging both the goods transport sector and the importers of production.

A report prepared by the Port Authority of the Bay of Algeciras published in March 2019 evidences what Francisco José López said and indicates that the delays are due to the “great accumulation in the management of files by the Foreign Health body” and, consequently, the diversion of traffic to ports in Portugal and northern Europe is taking place.

The report also shows that these inspections are carried out by other bodies (Plant Health and SOIVRE).  Between 2010 and 2018 the number of files processed, which are not covered by any Community legislation, has increased by 113%.