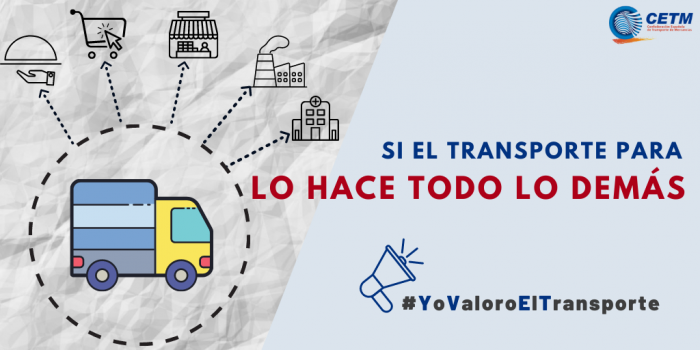 The Spanish Confederation of Freight Transport (CETM) has always worked to support road freight transport and to highlight the value of a sector that is essential for the functioning of the economy and the supply of the population, as well as to make society, shippers and the Government aware of the role that transport companies and professionals play in our daily lives.

It is true that during the pandemic, many have realised the importance of the work they carry out, since their activity has ensured that the supply of food products, health material and medicines was guaranteed, despite the harsh conditions in which they had to do so.

However, on many occasions, transport is still the forgotten sector, even though 85% of goods are moved by road and lorry and that the sector accounts for 4.8% of GDP, generating more than 600,000 direct jobs.

The strike called by the National Road Transport Committee (CNTC) from 20 to 22 December, of which the CETM is a member, is the only alternative that the government has left after countless attempts to reach an agreement that responds to their demands.

The transport associations put together a list of the most urgent demands to ensure the survival of the companies in the sector and, therefore, the recovery of the Spanish economy, but it is a series of demands that they have requested throughout their history without finding an effective response from both the Government and their clients, among which the following stand out:

Consult HERE the infographic with the main transport demands:

Thanks to the work and effort of transport companies and their professionals, the functioning of supply chains and the activity of other sectors is assured, as well as the welfare of citizens. It is time for the sector to be valued as it truly deserves and for the Government to seek real solutions to prevent its destruction. The transport sector will maintain the employers’ strike until this happens.

From the CETM we want everyone to be aware of what the cessation of our activity could mean: if transport stops, everything else stops. That is why we have created this image under the hashtag #YoValoroElTransporte as a gesture of support for a sector that is essential.